Registration is closed for this event
Mini-Concert Featuring GertieNtheT.O.Boyz with Ted Ramirez 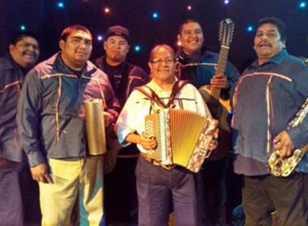 Friday March 12th, 7:00 pm - 8:00 pm.  FREE, online tips appreciated. All tips go direct to musicians.  Zoom link will be provided upon registration. There will also be a Meet & Greet period when folks may ask questions or comment on the music. CLICK HERE TO MAKE AN ONLINE DONATION.

“GertieNtheT0.Boyz” is the premiere waila (an O’odham word meaning "dance") band from the Tohono O’odham Nation located in central and southern Arizona.  Gertie Lopez (founder) performs a mixture of traditional and contemporary waila music in her native language, O’odham, and in English.  Waila music is the most-popular community dance music on the Tohono O’odham Nation and includes musical rhythm styles: polka, chotes (2-step), cumbia, mazurka, and kwalya (a traditional form of O’odham square-dance).  Tohono O’odham, is the official name of her tribe which is abbreviated as T.O.  Gertie is the first Tohono O’odham female bandleader.   She is a beloved musical treasure both in and outside of traditional indigenous circles.

Teodoro "Ted" Ramirez is a southwest folk musician whose music celebrates Southwestern life, land and culture. He has been designated one of 100 Arizona Culture Keepers, and was named "Tucson’s Official Troubadour" by the Tucson mayor and council of Tucson in 2001.