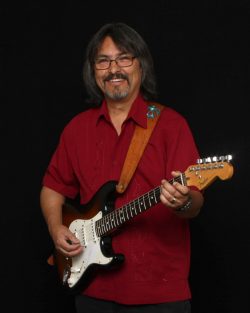 Mark Guerrero’s songs have been recorded by artists such as Herb Alpert, Trini Lopez, Chan Romero, and his late father, Lalo Guerrero, known as the “Father of Chicano music.”  Mark’s recording of his song “I’m Brown” is currently featured in the Grammy Museum exhibit “Songs of Conscience, Sounds of Freedom.”  In addition to his own concerts, Mark has performed with Redbone, Eric Burdon, El Chicano, Tierra, Lalo Guerrero, and many others. In this concert, he will be playing his original music and the music of his father, Lalo Guerrero.