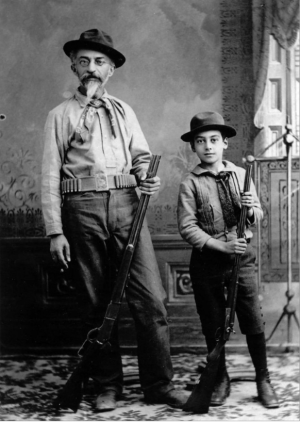 Early Jewish settlers in Southern Arizona came seeking economic opportunity, adventure and the possibility of a new life. Many played a critical role in the founding and development of their respective communities and towns. The first Jewish Congregation in the Arizona Territory began to form in Tucson in 1880 when Isadore Gotthelf along with his brothers Jake and Dave organized a small group that included Samuael Drachman and Alex Levin to form a congregation for worship and to philanthropically support the greater community.

In 1883 Charles Moses Straus was elected the first mayor of Tucson. He, along with Jacob Mansfeld, helped establish the University of Arizona. Strauss was instrumental in the construction of the first city hall and the Carnegie Free Library in Tucson. Come learn about these and so many others who helped make Tucson and Southern Arizona what they are today.

***This lecture will take place a the pub at LaCo Restaurant, 201 N. Court Avenue, across the street from the Presidio Museum.  Lectures will be presented live only.

(Photo of Charles Strauss, the first Jewish mayor of Tucson, and his son – source: https://momentmag.com/jewish-routes-arizona/)