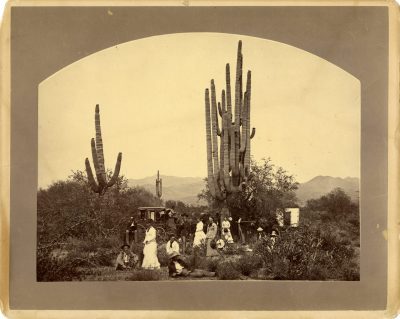 When the U.S. Army ordered troops into the Arizona Territory in the 19th century to protect and defend newly established settlements, military men often brought their wives and families – particularly officers who might be stationed in the west for years.  Most of the women were from refined, eastern-bred families with little knowledge of the territory.  Their letters, diaries, and journals from their years on Army posts reveal untold hardships and challenges.  They learned to cope with sparseness, the heat, sickness, and danger, including wildlife they never imagined.  These women were bold, brave, and compassionate.  Combining their words with original research and tracing their movements from post to post, author Jan Cleere has assembled a collection of historical narratives that explores the lives of early military wives, women who became an integral part of military posts and who played an important role in civilizing the untamed frontier.

This lecture will be presented ONLY via Zoom. PLEASE REGISTER EARLY! Registration closes at 6 pm on the day of the lecture, as it may take close to an hour for registrants to receive their confirmation email with the Zoom link.