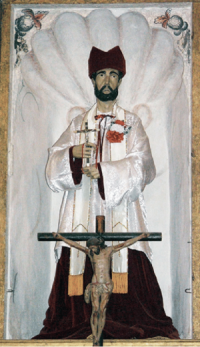 Arizona has always been a border territory, with many different cultures living in the area. The late 17th and 18thcenturies witnessed an influx of foreigners in the arrival of the Jesuit missionaries. By ca. 1830, the number of missionaries of German origin had exploded, and they dominated the entire province in religious and missionary activities. Dr. Albrecht Classen will take us back to that time to discuss what motivated those missionaries, what they achieved, and why they were eventually expelled (maybe because they had been too successful for the Spaniards?).

Dr. Albrecht Classen is University Distinguished Professor of German Studies at the University of Arizona. While working mostly as a medievalist and early modernist (115 books), he has also published extensively on the German speaking Jesuit missionaries. In one book, he translated the letters by the Swiss Philipp Segesser (d. 1762), in another he reviewed the entire history of those German immigrants to Sonora. He has received numerous teaching, research, and service awards, most recently (2021) the College of Humanities Research Award. He is the editor of two scholarly journals (Mediaevistik and Humanities) and is currently member of the Executive Board of Arizona Humanities.