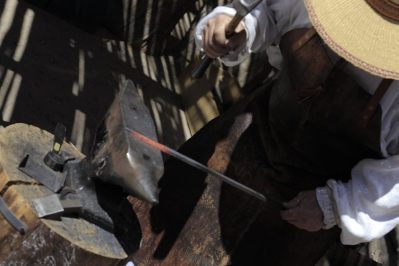 The Presidio Museum comes alive allowing visitors get a feel for what it would have been like to be in the Presidio at its height of occupation in the late 18th century. Traditional activities include blacksmithing, soldier drills and the firing of a four-pound bronze cannon, children’s games, and tastings of handmade tortillas.

This month, in addition to our traditional demonstrations, Living History will focus on the trades and homemaking skills of the Presidio, focusing on the time period of 1775-1918. These crafts and skills were crucial to the survival of the presidio and later residents of Tucson.  As part of these demonstrations, visitors will have the opportunity to meet Sister Monica Corrigan (a re-enactor), the leader of the first nuns to come to Tucson in 1870 known as the Seven Sisters of St. Joseph of Carondelet.  Sister Monica wrote a book about their travel adventures getting to Tucson. She also founded the St. Joseph School for Girls, the first girls’ school in Tucson, which used to be located on 17th St.

This event is included in admission, which can be paid at the door.