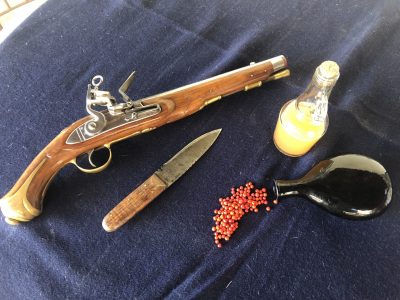 The Presidio Museum comes alive allowing visitors to get a feel for what it would have been like to be in the Presidio at its height of occupation in the late 18th century.  Traditional activities include blacksmithing, soldier drills and the firing of a four-pound bronze cannon, children’s games, and tastings of handmade tortillas.

This month, in addition to our traditional demonstrations, Living History will take a look at crime in Tucson from New Spain to statehood. A special activity included in this month’s event is “Solve the Murder Mystery Using History.” Attendees will discover when they arrive that someone in the Presidio Museum has been “murdered.”  Clues to solve the murder will be presented at many of the re-enactment stations.  Can you solve the murder?

Visitors will also have the opportunity to meet a re-enactor portraying  Atanacia Santa Cruz Hughes who will tell the story of her sister Petra Santa Cruz whose husband Hiram Stevens attempted to murder Petra and then kill himself. These presentations will occur at 11:15 am and 12:45 pm.

Lectures will also be held throughout the day covering the following topics:
* The Six Legal Executions in Tucson – 10:30 am
* Women Misbehaving – 11:45 am
* Tales from the Territorial Coroner – 1:15 pm

Buffalo Soldiers will have a display about the Wham Paymaster Robbery that occurred in 1889.  The US Paymaster was transporting payroll accompanied by Buffalo Soldier escorts when they were ambushed by bandits.  Eight of the soldiers were injured  and the money was taken.  Two officers were awarded Medals of Honor, and the eight soldiers received a Certificate of Merit.

This event is included in admission, which can be paid at the door.